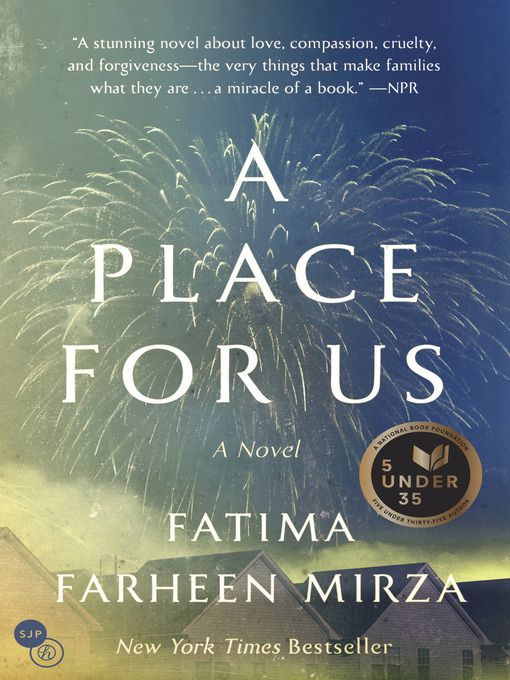 A Place for Us


"Mirza writes with a mercy that encompasses all things." — RON CHARLES, Washington Post
"A Place for Us is a book for our times." — CHRISTIANE AMANPOUR
The first novel from Sarah Jessica Parker's new imprint, SJP for Hogarth, A Place for Us is a deeply moving and resonant story of love, identity, and belonging

As an Indian wedding gathers a family back together, parents Rafiq and Layla must reckon with the choices their children have made. There is Hadia: their headstrong, eldest daughter, whose marriage is a match of love and not tradition. Huda, the middle child, determined to follow in her sister's footsteps. And lastly, their estranged son, Amar, who returns to the family fold for the first time in three years to take his place as brother of the bride. What secrets and betrayals have caused this close-knit family to fracture? Can Amar find his way back to the people who know and love him best?
A Place for Us takes us back to the beginning of this family's life: from the bonds that bring them together, to the differences that pull them apart. All the joy and struggle of family life is here, from Rafiq and Layla's own arrival in America from India, to the years in which their children—each in their own way—tread between two cultures, seeking to find their place in the world, as well as a path home.
A Place for Us is a book for our times: an astonishingly tender-hearted novel of identity and belonging, and a resonant portrait of what it means to be an American family today. It announces Fatima Farheen Mirza as a major new literary talent.

Some content below may have been reported by users for containing spoilers or offensive content. Learn More

This book had all the imprints of a best selling novel. The author attended the Iowa Writers Workshop. It was published by a major publisher and included in a celebrity's book club, but I found this book to be poorly written. I thought the author was guilty throughout of telling instead of showing. The characters never seemed 3-dimensional. Above all, the writing was very confusing and hard to follow. She would start a chapter with "he" or "she" and you would have to read almost the whole chapter to figure out which character the author was highlighting. The switching back and forth in time and from different characters points of view was not successful in my opinion. It did not enhance the story, just made it more confusing.

The format and lack of quotation marks when remembering past conversations is very confusing. However, if you push through the first 100 or so pages, the story grips you and makes you want to keep reading despite the format.

Filled with beautiful description, this book is an complicated family drama. The last chapter is heartbreaking. Read it.

Tagged as Offensive (Hide) (Show)
j
JANMAYS Jun 19, 2019
This content is tagged as offensive and is hidden.

A friend of mine (the same friend who had shared about There There) had recently read this book, so I figured I'd grab it from the library. I didn't know what it was about prior to checking it out (surprise, surprise), and, to be honest, I would say for the first half of the book I wasn't really sure what it was about. It seemed as though nothing much was happening, and it was progressing slower than I would have liked, but at the same time I couldn't put it down. Although there are some heavy topics discussed in the book (substance abuse, arranged marriage, racism, religion, etc), I think what I ended up liking more was the seemingly mundane. The drama was relatable because many of us have experienced the different personalities and dynamics within a family - even if we aren't an immigrated Muslim family. The book jumped around a lot, (both with the character's point of view and the time in the story) but seeing as there weren't a ton of characters to deal with it didn't make the switches too hard to follow. I think the final part in the book (it was broken up into four parts) where it was written from the father's perspective was my favorite. (I'm hoping there's a sequel because I'd love to know where the characters go from here.) I would give it an 8 out of 10.

I can’t believe that this is Fatima Farheen Mirza’s 1st book, it is so well written and complex. I really enjoyed it and the glimpse it gave into another culture. I would recommend this book.

I read this book the same week as the horrific massacre at two mosques in New Zealand. This beautiful book tells the story of a Muslim family living in California. The parents immigrated from India to this country; the husband was already working here, and his wife joined him through an arranged marriage. They raised three children here in the US.

I wanted to read this book to learn more about Muslims and how their lives might be different from mine. What I learned is that Muslim families and their lives are much more similar to mine than they are different.

Muslim children love their parents, but want to break free of parental control. They have one foot in each world, and struggle to make sense of the differences. They love the traditions of their religion, but they chafe under some constraints.

Muslim parents (like all parents) do what they think is best for their children, even if their children disagree, and even if the parents come to realize later in life that their decisions were flawed.

There are cultural and religious differences between Muslims and me, and while they are important to the Muslim family members, they seemed far less important to me than all of the similarities. As the reader, the differences that bothered me the most were gender differences. Muslim girls have to decide at age 9 whether to wear hijab. They are greatly restricted in their interactions with boys (though that is harder to enforce in the US), in their social interactions with other girls, and in their athletic endeavors. On the other hand, all of the children in the family featured in this novel are strongly encouraged to study hard and succeed academically, and the two daughters are especially good at that. Their academic success allows them to break free of some constraints, though when a child is raised in a strong religious tradition, some things are embedded in the child’s character forever.

And there are times in this novel when members of this family experience violence, discrimination and bigotry, though that is not the main focus of the book. The reader experiences the anger and shame along with the victims.

This novel is not presented in a linear fashion; it starts at the oldest daughter’s wedding, and includes many flashbacks. Parts of the story are told from the perspective of the oldest daughter, the mother, and the son (who has many struggles in life); and the last part is told in first person by the father, who has previously been presented as strict and unyielding.

I loved this book! Though some of the family’s experiences were foreign to me, it was easy to empathize and feel what the various characters were feeling. I had tears in my eyes often while reading this book. It is not a sad story (overall), but there are sad parts, and I experienced them emotionally with the characters in the book.

A compelling family story that enlarges your view of the American experience. The time shifts may bother some folks, but it all fits together as a whole. I read a lot about this one, and it did not disappoint.

There are no age suitabilities for this title yet.

There are no summaries for this title yet.

There are no notices for this title yet.

There are no quotes for this title yet.

Find it at Library