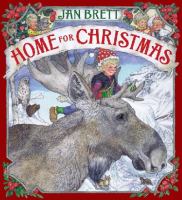 I bought a copy of this from Amazon.

Brett has outdone herself! What a cute story and her usual adorable illustrations!!!

We love this book. A lovely family story and the illustrations are exquisite.

Rollo, a rebellious little troll, was tired of helping his family every day on the farm with chores such as chopping wood, collecting the eggs and caring for the animals. One morning, he decided that he had had enough. Grabbing his rucksack, he ran away into the forest.
Little Rollo hiked and played all day. That night, feeling very tired, he snuggled down in an owl’s nest. He stayed there happily for a few days, but when Mother Owl pushed the owlets, one by one, out of the nest for their first flying lesson, he knew it was time to leave.
Next, the little troll joined a bear family. After that, he visited an otter family, a lynx and some moose, staying with each for a few days.
By now, the cold snowy weather had arrived, and something had happened. Rollo was no longer feeling rebellious about doing daily farm chores. He was lonely and homesick, and he missed his family.
Returning home after a long toboggan ride, the little troll was welcomed home with open arms by his mother, father and sister - just in time for Christmas!
In the following days, the troll family noticed something quite nice. Rollo no longer complained about his chores – in fact, he did them very cheerfully.
Jan Brett’s superb picture books are extra-appealing because of the abundant amount of detail included in her gorgeous illustrations. Readers will be interested to know that she created this picture book after a trip to the tundra area of Sweden, where she observed many of the animals included in this story.

There are no notices for this title yet.

There are no quotes for this title yet.

Find it at Library